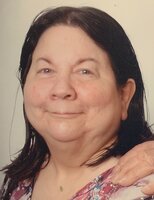 RAPPOLD, Susan M. (Winters) - passed away peacefully on June 27, 2022.  Susan was the beloved wife of Guy F. Rappold for 37 years.  She was the daughter of the late Donald and Dorothy Winters.  Susan is survived by her son, Christopher Herrle of Florida.  She is also survived by her sisters Donna (Paul) Vanasse, Karen (Michael) Morris, and Barbara (John) Baker.  She is predeceased by her sisters Fay and Linda.  Susan is also survived by her close family friend, Colleen Fratianni, and her children Cathleen (Chuck) Peter, Jay and Evan Fratianni.

Susan enjoyed traveling having visited Iceland and many states.  She was an advocate for all animals and rescued several during her lifetime.  Susan also enjoyed driving and listening to her golden oldies.

Family is requested to be at the Castleton Funeral Home at 10:45am on Wednesday, June 29, 2022 to line up to escort Susan to her final resting place in Mountain View Cemetery where a private graveside service will be held.

The family would like to extend their deep felt thanks for the care and compassion that Michele Carey, Diana Mahoney, and Amanda Laurange gave to Susan during her final days.  Online condolences may be offered at Castletonfuneralhome.com